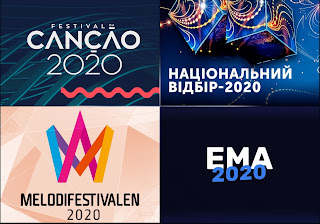 Ukraine will choose today its representative in Rotterdam, in a show aired from the Polytechnic Institute (Kiev) and hosted by Sergiy Prytula:

Verka Serducka and Tina Karol will open the show in a special performance. Jamala, Eurovision winner in 2016, will perform the song “Zhali”

Slovenia: EMA 2020 - Final (20:00 CET). link:
Twelve participants will compete by the ticket to ESC 2020. Klemen Slakonja will host the final:
Saška and Parvani Violet, got the place from the new talents contest, EMA FRES. Tinkara Kovač was the Slovenian representative in Eurovision Song Contest 2014. Lina Kuduzović was third in Junior Eurovision Song Contest 2015 as Slovenian representative.

The jury will choose three finalists in the first round of voting. The public in the second round will choose between them the winner and Slovenian representative in Rotterdam.

Sweden: Melodifestivalen 2020 - Semi-final 4 (20:00 CET). Link:
Fourth and last semi-final of the Melodifestivalen 2020, hosted by  Linnea Henriksson, Lina Hedlund, and David Sundin:
One of the participants is Victor Crone. Estonian representative in Tel Aviv got the place to the final with "Storm". The veteran and Eurovision representative Nanne Grönvall is another participant in the show. Hanna Ferm, third place in the last edition of Melodifestivalen with Liamoo, will compete, like the rest of the participants, for one the two places to the final or the two places for the Andra Chasen show.

Malmö Arena, in the city of Malmö, and venue for Eurovision Song Contest 2013 will hold the show. Televoting will have two rounds. In the first round, two participants will be eliminated. The rest of the participants will be evaluated again by the public, choosing two for the final and two to the Andra Chasen (Second Chance show).

Portugal: Festival da Cançao  - Semi-final 1 (23:00 CET). Link:
Festival da Cançao 2020, the musical contest and national selection for the Eurovision Song Contest, will start tonight with the first semi-final.
Eight participants will compete in the show, aired from the RTP Studios (Lisboa) hosted by Tania Ribas de Oliveira and Jorge Gabriel, apart Inês Lopes Gonçalves from the Green Room.
Four semi-finalists will advance to the final, chosen by the jury and the public voting (50/50). The final will have eight participants (four from each semi-final), from the Elvas city, near to the Spanish border, on March 7th. The winner, and Portuguese representative in Rotterdam, will be chosen by a jury from the seventh regions of the country and the public voting with SMS.