Super Saturday with three finals and four semi-finals around Europe 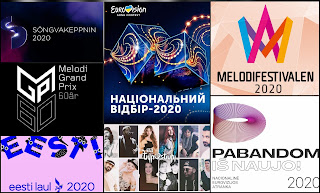 Ukraine will hold the second Semi-final of the Ukranian national final from the  Polytechnic Institute of Kie, hosted by Sergiy Prytula:

The winner, and Armenian representative in Rotterdam, will be chosen by a jury and the public. Vladimir Arzumanyan, Armenian winner of ganador del Junior Eurovision Song Contest 2010 is on the list of participants. Another artist well-known is Athena Manukian, a participant in X Factor UK and the Greek selection for JESC 2008.

From Spektrum Arena (Trondheim), the 60th Anniversary of MGP will choose this Saturday the Norwegian representative in the Eurovision Song Contest 2020:

The final will be the first time since 1989 takes part outside of Oslo, being the third time that this city holds the show, hosted by Ingrid Gjessing Linhave, Kåre Magnus Bergh y Ronny Brede Aase.

One of the most important changes in this edition of the contest is that the international jury in the final disappears and the next Norwegian representative in Eurovision will be chosen only by the public. Voting in the final will have three rounds. In the first round, six participants will be eliminated. The four remaining participants will compete in the second round in duels. The winner each duel will compete again to become the winner and Norwegian representative in Rotterdam, chosen by the televoting. The voting will be able from this link.

A new semi-final of the Swedish national selection, Melodifestivalen 2020, will be held this Saturday, hosted by Linnea Henriksson, Lina Hedlund, and David Sundin.:

Mariette returns to the contest after her participation in 2015,2017,2018, like Mohombi, who debuted last year and reached the final. Amanda Aasa, after to be chosen in the new talents contest P4 Nästa, will too compete in this semifinal.

Lithuania will choose tonight the winner of Pabandom Iš Naujo 2020, that will represent this country in Rotterdam. The show will be hosted by Gabrielle Martirosian y Giedrius Masalskis and Ieva Zasimauskaite (Lithuania 2018):
Iceland: Söngvakeppnin - Semi-final 2 (20:45 CET).Link:

From Háskólabíó (Reijkiavik) Islandia will hold the second, and the last, semi-final of  Söngvakeppnin. The public and a jury will choose two participants to the final on March 29th (Laugardagshöll):
The songs in the semi-finals will be only performed in Icelandic. Dady Freyr was runner-up in the Icelandic final of 2017, while Hildur Vala was the winner of the second edition of the Icelandic version of Idol.