Running order of the Depi Evratesil 2020 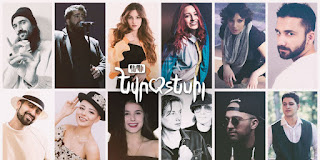 
The final of Depi Evratesil 2020 will be held on February 15th. The winner, and Armenian representative in Rotterdam, will be chosen by a jury and the public.

The participants and songs have been chosen internally by a jury. Vladimir Arzumanyan, Armenian winner of ganador del Junior Eurovision Song Contest 2010 is on the list of participants. Another artist well-known is Athena Manukian, participant in X Factor UK and the Greek selection for JESC 2008.

After confirm the participation in the Eurovision Song Contest, Armenia announced a new edition of Depi Evratesil as national final. This contest returns as Armenian final after the internal election in last edition with Sbruk and “Walking out”, an entry  that didn't qualify to the final in Tel Aviv.