Romania will announce tonight its representive in Rotterdam 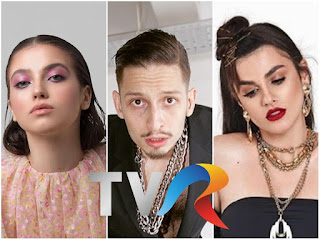 Yesterday, Romanian broadcaster, TVR, and its musical partner, Global Records, announced the three candidates to represent the country in this edition of Eurovision Song Contest: Roxen, Cezar and Diana V.

Announcement was done in the TV program Destinaţia Eurovision, the program that will announce tonight, from 19:50 CET, the chosen finalist. Watch online on this link.

The finalists are new talents in the Romanian music:

Big first success of Roxen was in the last summer, when she collaborated with Sickotoy in “You Don’t Love Me”, reaching third place on Airplay chart and a big success too in Bulgaria. Her first single, “Ce-ti Canta Dragostea”,  got a best result, and from November, with more than 8,5 millions views on Youtube. Roxen has been  compared to Billie Eilish or Dua Lipa.

Cezar, tried to participate in the last edition of The Voice of Romania, but didn't qualify in the blind auditions. He releases video. of songs with a several success. The most popular is  “Nino nino”, with 160.000 views on YouTube.

Diana V, is the less known, with no important releasing songs. Her Instagram profile was created  recently, maybe due her candidacy to be the Romanian representative in Rotterdam.

The Chosen candidate will take part in a composer camp with some of the best composers in Romania.

Best five song will compete in the national final, Selecta Nationala, on March 1th, where the Romanian song will be chosen by a jury and the televoting (50/50).

The five songs will be chosen by a musical expert jury (composers, writers, TV and radio producers, etc). The jury will evaluate aspects as the sound, originality, style diversity and message each song.