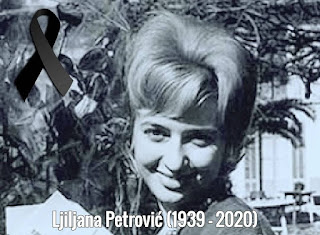 Ljiljana Petrović, first participant of Yugoslavia in Eurovision has passed away at 81.
Ljiljana Petrović represented this country in Eurovision Song Contest 1961 (Cannes) with the song “Neke davne zvezda”.
Born in 1939 in the Bosnian city of Brod, then Yugoslavian Kingdom, he grown and lived in Novi Sad (Serbia), where started her musical career singing in local festivals and clubs.

Her career goes a one step further in the summer of 1960 at the Mali Lošinj Festival, when the director of Jugoton, the most important record company of Yugoslavia notices her talent, signing with her a record contract.
After sign the contract she records some  songs of the jazz composer Jože Privšek. One of these songs, “Neke davne zvezda”, with lyrics of Serbian writer, poet and director Miroslav Mika Antić,  is submited  to the first national final of Serbia for Eurovision Song Contest 1961.

Nine songs participated in the final, evaluated by three regional judges. Ljiljana wins the contest over most importants singers as Gabi Novak or Lola Novaković.
After the victory competes in the European musical contest where reaches the place 8th of 16 participants.

This participation becomes her a famous singer in Yugoslavia, competing from then in national festivals where she approaches to the victory.

After the releasing of successful songs as “Neka to ne bude u proleće”, her song in the Opatija Festival 1966, she abandons her musical career late 70's.
In 1989 returns as poet and writer of Haiku (Japanish traditional poetry) releasing in 1991 a book with this theme.
From eurovision-spot we wish send our condolences to her family and friends
R. E. P. Ljiljana.
Fuente: danas.rs, escunited