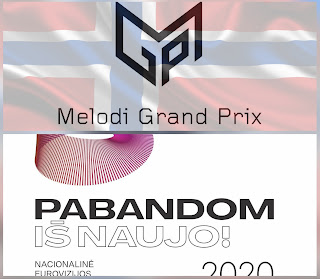 Norway and Lithuania will hold, tonight, shows on their national finals for Eurovision: Melodi Grand Prix and Eurovizijos Atranka.

From H3 Fornebu Arena (Oslo), the edition of the 60th-anniversary follows tonight with four participants from the West region of the country:
“Over The Sea” has been composed by Alexander Rybak, winner of Eurovision Song Contest 2009 and Norwegian representative in 2018.

They compete in two duels. The winners of both duels will compete again in another duel for the victory and advance to the final. A voting system, free and online, will decide the results both rounds.

You can watch the show, hosted by Ingrid Gjessing Linhave, Kåre Magnus Bergh y Ronny Brede Aase, in this link.

Renamed this year as Pabandom Iš Naujo 2020, nine participants of Lithuanian format will compete tonight in the first semi-final. Four will become finalists, chosen by the public and a jury:
The veteran participant of the Lithuanian contest Aistė Pilvelytė, is one of the semi-finalists and favorite to reach the final and the victory. Her song ,“Unbreakable”, has been created by Thomas G:son, composer of the well-known song “Euphoria”. Like Aistė The Roop, chosen in the last show, are another favorite to get the ticket to Rotterdam.

The public will vote during the broadcast of the show, because the jury (Darius Uzkuraitis, Giedre Kilciauskiene, Geruta Griniute, Leonas Somovas, and Vaidotas Stackevicius) voted when was recorded,  on January 28th.