Israel selects the four finalists of its national final 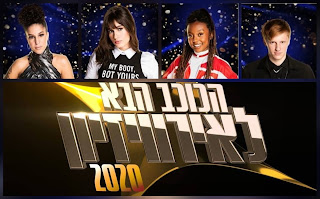 The election of the Israeli representative in Eurovision Song Contest 2020 is coming, and the four finalists that will compete for this honor have been chosen.

Chosing was done in the two last shows  of the contest and talent show, Hakokhav Haba L'eurovizion, against another four candidates that said goodbye to the competition in two voting round by jury and public.

The final will be held tomorrow, Tuesday, February 4th, when the relay of Kobi Marimi en Rotterdam will be chosen.

After the show, the winner and the public broadcaster, KAN, will work together to choose the Israeli song in the upcoming Eurovision Song Contest. The song will be unveiled on March 3th. Is the first time that KAN selects the song, because last years  was the broadcaster Keshet, producer of Hakokhav Haba, who did it.