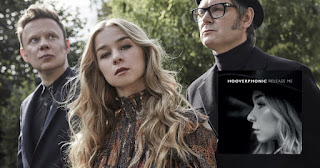 The well-known group Hooverphonic, Belgian representative in Rotterdam, has released today in the MNM radio, "Release me", the song to compete in the contest in May. In the radio interview, Alex Callier has explained the song was inspired in the period when his father, now deceased, suffered a serious illness.


The song is a slow balad that some specialized media have compared with the main song of James Bond Film saga.

As the band explained they wanted to compete in Eurovision a song that reflects the style of Hooverphonic but more comercial, adding more string instruments.

The official video clip was released from 11:00 CET, during a press conference in the studios of the Flemish broadcaster, VRT, offering more details about the song. The video clip will be available from this afternoon in the Hooverphonic Youtube channel.

Belgium will be represented in Rotterdam by this internationally renowned group, known for songs such as "Mad About You" or "Gravity". As well as the Belgian Flemish entity, VRT, commented before revealing its name, its participation in the European musical contest would be with an "important and international artist".

Hooverphonic was formed in 1995 and currently, the band members are Alex Callier, Raymond Geerts, and Luka Cruysberghs, that joined as lead vocalist in 2018. They have released ten studio albums during their professional career, become famous in 2000 when they released "Mad about you".