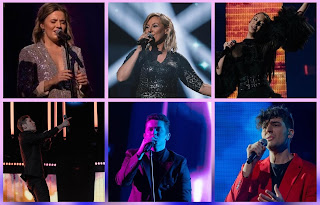 Estonian broadcaster, ERR has chosen tonight the first finalists of the national final  of Eesti Laul 2020 between twelve semi-finalists:

After select the top eight of all participants, the public and the jury have chosen in the first round fourth finalists: Rasmus Rändvee, Anett x Fredi, Egert Milder and Synne Valtri & Väliharf. In the second round only the public has chosen two finalists more: Laura and STEFAN.

Laura was representative of Estonia in 2005, being part of the "Girlband" Suntribe and in 2017. Stefan was "Superfinalist" in the last two editions of Eesti Laul.

This Semi-final was held in the University of Tartu Sports Hall, hosted by Tonis Niinemets y Karl-Erik Taukar. Inés (Estonia 2000) and the rap group 5MINUS habe been guests artists.