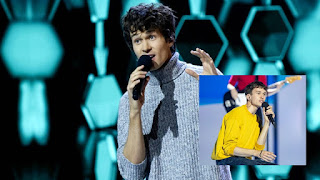 The singer is the vocalist of the Lake Malawi group, Czech representative in Tel Aviv. He was born in Trinec (Czech Republic), a border city with Poland, speaking Polish with fluent from his childhood.

In fact, his participation in the national final caused that Polish broadcaster, TVP, had to change the rules of the talent show, opened only to Polish artists.

Černý got the victory with the performance of "Please please me", a song of the British well-known group The Beatles, the theme of the show.


The participants of the show, aired this afternoon after to be recorded some days ago, have performed "covers" of The Beatles' songs, being evaluated by the jury, composed by Cleo (Poland 2014), Michal Szpak (Poland 2016) y Gromee (Poland 2018):
The three finalists, chosen in the last weeks, will perform in the final two songs: a "cover" of a popular song and another that will be his entry in Eurovision Song Contest if the case to win the show:
Fuente: TVP