UMK 2020:Krista Siegfrids and Mikko Silvennoinen will be the hosts.Participants announcement on January 21 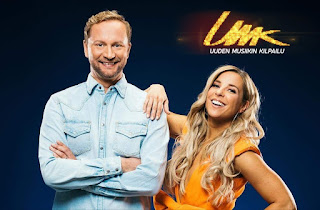 Finnish broadcaster, YLE, has announced the hosts for the next edition of the national final, UMK 2020.

Krista Siegfrids (Finland 2013) will have this honor by fith time, and she will be acompanied again  for Mikko Silvennoinen, popular TV personality and a veteran UMK host.

Also on January 21, YLE will unveil the six  participants of UMK and the ten jury members. The press conference for this announcement will be aired live by Internet.

UMK 2020 will be held on March 7 at Mediapolis Studio in Tampere.

The entries for the Finnish national final were selected through open system, receiving 426 applications in total, chosing from them six finalists.

The chosen songs are said to be of very high standard and diverse in style, as promised by YleX’s music manager and the head of the UMK 2020 selection jury Tapio Hakanen.

This edition returns to the origins of the format, with the representative and song for Rotterdam, selected on it.

The last two years Saara Aalto and Darude were selected internally, with their songs chosen by the public in a UMK's final with three options.