“Take me as I am”, name of the Georgian song in Rotterdam 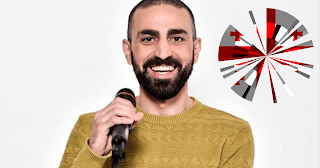 Georgia has announced today the name of its song in Rotterdam: “Take me as I am”. With it, the country expects to advance to the final, qualification that don't get from 2016.

“Take me as I am" will be performed by Tornike Kipiani. Tornike became Georgian representative in Rotterdam after his victory in the last edition of the talent show Georgian Idol.

This song, defined by Tornike how a “mix between classic rock, electronic and dubstep”, will be released coming soon, although Georgian broadcaster hasn't said when will be the releasing day, and if the lyrics will be in English or Georgian.

The singer will be accompanied on the stage for three backing vocals: Mariko Lezhava, Mariam Shengelia and Aleko Berdzenishvili.

Tornike Kipiani,known as Kipo, reached the fame after his participation in X Factor Georgia in 2014, with Tamta (Chipre 2019) as his "coach" . In 2017 competed in the Georgian national final, but was only 23th with  “You Are My Sunshine”.

After the Semi-final Allocation Draw, Georgia will be allocated in the second part at the second Semi-final, on May 14th.