"Universo", Spanish entry in Rotterdam will be released on January 30th 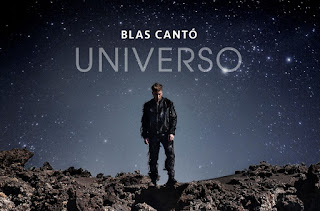 On Tuesday Blas Cantó and RTVE unveiled "Universo" as the title of his song in Rotterdam. Today they have shown the cover and January 30th at 10:00 AM as the date when the song and its video clip will be released on ww.rtve.es. The next day will be available on digital platforms and the Youtube Channel of Blas Cantó.

It's expected that the artist sing it for first time, someday after, in a program of the talent show "Operación Triunfo 2020".

A name, as the singer explained time ago as a clue, "has an only word and will be easy to understand in many languages".

Before the title announcement, the singer cleaned all posts of his Instagram profile and only left a post with the hashtag  #euroestreno, a symbol of a new musical career that Blas Cantó will start with his participation in Eurovision. Also in the only story in this profile appears the artist touching the nose of the Greyfriars Bobby statue, the starring dog in the Scottish most popular legend while he says "I know that you will help me".

" "Universo has a new and risky style for me, but keeping my essence. I'm so happy with the results. I had carte blanche to work in the song", has explained Blas, satisfied with the collaboration of the Spanish broadcaster to create his song in the 65th edition of the Eurovision Song Contest.
As the singer has explained in an interview to La Opinion de Murcia that "the chosen song has been created with Dan Hammond, composer and producer, and another professional of the music"

Hammond participated, some week ago, with Blas Cantó in a songwriter camp, with the musical producer Mikolaj Trybulec, that created "Friend of a friend", the song of Czech Republic in Tel Aviv and the English duo Bright Sparks, that got that their song "On My Way", was played 80 million times in Spotify in his collaboration with  DJ Tiësto.
On October 5th, Blas Cantó became the Spanish representative in Rotterdam 2020 after a internal election of RTVE. Spanish broadcaster announced this format for Eurovision 2020 after the bad results in the last years with a national selection. In 2018 and 2019 this selection was made with the talent show Operacion Triunfo.