Salvador Sobral will appear in the Netflix film "Eurovision: The Movie" 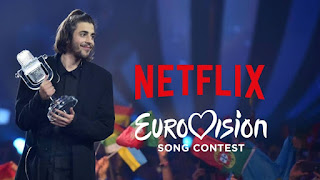 New cameos in the production of Netflix on the European musical contest.

If a few months ago it was Netta, who claimed to be in the cast, now it is Salvador Sobral, winner in Kiev 2017, who has announced that he will also be in the film of the streaming platform dedicated to the Eurovision Song Contest, during an interview in the RTP program 1"Prova Oral".
"I was invited to participate in a movie with Will Ferrell, called " Eurovision: The Movie.". I went, and I participated with Will, Rachel McAdams and Pierce Brosnan in a role where I had to play the piano and sing. A great production that it will be released in May ", the singer explained.

As he has added, his role will be a street singer, taking part in a single scene singing while playing the piano. However, when he arrived on the set, the producers decided doing a scene with dialogue with Will Ferrell. However, this scene could not be done because, it seems, Salvador himself had a closed contract.

What he has not explained is who would appear in the only scene he has shot of this production, in which Will Ferrell, as in other of his projects, has been a producer, screenwriter, and actor.

"Eurovision: The Movie" is the story of two Icelandic singers, played by Ferrell and McAdams, in their dream to become representatives of this country in Eurovision, with Pierce Brosnan, as Ferrell's father, Demi Lovato or the actor Dan Stevens ("Downtown Abbey"). For filming the team moved to the contest in the years 2018 and 2019.

Although Sobral confirms that it will be in May, there is nothing official confirmation about when it will be the date of its premiere.

With his victory in the contest three years ago with "Amar pelos dois", the Portuguese singer achieved for this country the first victory in Eurovision
Fuente: wiwiblogs