Raylee with "Wild" , first finalist chosen in semifinals of Mgp 2020 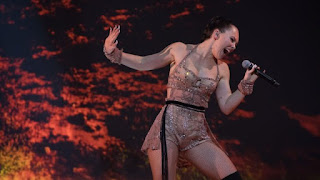 From H3 Fornebu Arena (Oslo), the edition of the 60th anniversary has started tonight with the first Semifinal with four participants from the South Region of the country.

They competed in two duels rounds:

1st round:
2nd round:
The winners in both rounds were chosen by the public. Raylee and "Wild" won the show and the place for the final, joining the five finalists selected internally by NRK: Didrik & Emi, Ulrikke Brandstorp, Akuvi, Sondrey and Tone Damli

This semi-final, that started at 19:50 CET, was hosted by Ingrid Gjessing Linhave, Kåre Magnus Bergh and Ronny Brede Aase