NTU unveils the participants in the Ukrainian format for Eurovision, Vidbir 2020 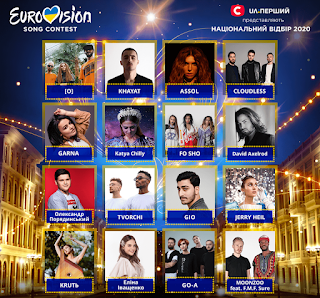 Ukrainian broadcaster NTU, has announced the sixteen participants that will compete in the national contest for Eurovision,Vidbir 2020, and organized by NTU and the private television channel, PBC
Before to select the participants, the filter for the artists interested to take part was a clause: all candidates with musical career in Russia from 2014 are forbidden. A fact that has caused that popular artists in Ukraine can't participate on it.
Five songs has been released, as the entry of Elina Ivashchenko, winner of the first edition  of The Voice Kids Ukraine and last of X Factor Ukraine.
Participants of  Vidbir 2020:
Vidbir 2020 will hold  two semi-finals on February 8th and February 15th. Jury and televoting (50/50) will select each semi-final three finalists to participate in the show, on February 22th,  where the Ukrainian representative in Rotterdam will be chosen with the voting system used in semi-finals.
Andrej Danilko (Verka Serduchka) repeat again as judge, this time with two new members: Tina Karol (Ukraine 2006) and  Vitalii Drozdov, managing director of Hit Fm Radio.
Fuente: NTU