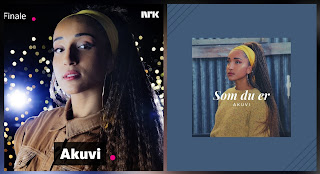 Today NRK, Norwegian broadcaster, has releases, “Som du er”, third pre-qualified finalist song, that will perform in the final of MGP 2020 by Akuvi. The song was composed by Akuvi herself and Andreas "Stone" Johansson.


Beatrice Akuvi Hosen Kumordzie, 25 years old, is an artist and composer of Ghanaian origin. Her sister, Anna-Lisa, was  fourth qualified in the superfinal of MGP 2019 with "Hallo. Both sisters has collaborated with their father in different concerts. Her personal experiences, together with a four-year trip in South Africa, have allowed her to create a new style artist, where she combines South African gospel, Afropop, hip-hop and R&B, or, as she calls it "infused neo-soul of reggae".

Following the format of this year, with a finalist performance each semi-final, tomorrow Akuvi will sing the song live in the third Semi-final as guest of the show.


This semifinal will be held at the H3 Arena in Fornebu (Oslo), at 19:50 CET. The four participants from Midle region of the country, will face each other in successive duels mode until left a single winner. This winner will get the pass to the final where he will join the five selected internally by NRK, and as happened with Raylee and Rein Alexander, chosen on the first and second semi-final.

JÆGER - “How About Mars”