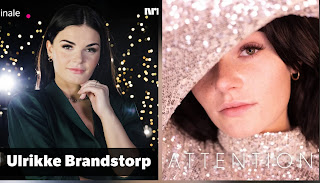 Norwegian broadcaster, has releases, “Attention”, fourth pre-qualified finalist song, that will perform in the final of MGP 2020 by Ulrikke Brandstorp, the composer.


Ulrikke Brandstorp, 24 years old, his second place in Stjernekamp 2018 made it very popular, appearing later in Adresse: Tel Aviv, Håp i ei gryte and Idrettsgallaen, where he did an emotional tribute to Marit Bjørgen and Ole Einar Bjørndalen. In the summer of 2019, she was one of the participants of the Allsang på Grensen summer festival, singing with Ben Adam the well-known "Shallow" of the film "A star is born", a performance was seen by more than 2 million people. She is a musical actress having participated as one of the protagonists of the musical Sound of the music. Ulrikke was fourth in the Norwegian national final with “Places”.

Following the format of this year, with a finalist performance each semi-final, tomorrow Ulrikke Brandstorp will sing the song live in the fourth Semi-final as guest of the show.


This semifinal will be held at the H3 Arena in Fornebu (Oslo), at 19:50 CET. The four participants from West region of the country, will face each other in successive duels mode until left a single winner. This winner will get the pass to the final where he will join the five selected internally by NRK, and as happened with Raylee, Rein Alexander and Kristin Husøy, chosen on the first, second and third semi-final.