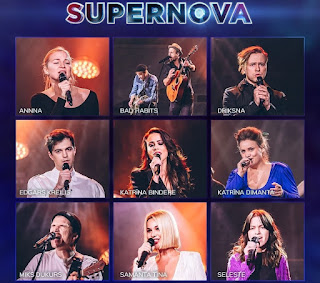 Supernova 2020 Running order:
Six-times veteran Samanta Tina, will close this final being the favorite to reach the victory. Other finalists are Katrīna Dimanta (Aarzemnieki, Latvia 2014) and Edgars Kreilis.

LTV also has announced the hosts of the show, Ketija Šēnberga y Toms Grēviņš, the fourth time in this role. Social network influencer Beāte Bērziņa (Beta Beidz) joins to them and will interview the artists after their performance.

Some days ago LTV unveiled the twenty-six candidates shortlisted from all submission received and that participated in the live auditions.
A jury evaluated these auditions and chose nine participants. To vote the jury considered not only the quality of the songs and the artist's performance in the auditions but also the reactions of each song on YouTube.
Source: LTV