Listen to "Universo", the Spanish song that Blas Cantó will perform in Rotterdam 2020 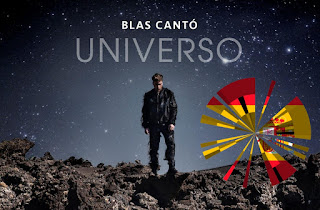 Last week RTVE, Spanish broadcaster, announced the name of its entry in Rotterdam, "Universo", a song that will be performed by Blas Cantó.

Among these days some details more have been unveiled as the cover, the style or a small "making of" of the video clip filming.

Today, Thursday 30th, RTVE has released the song that will represent this country on May 16th over the Rotterdam Ahoy stage.


The premiere was at 10:00 CET in the RTVE studios and aired from RTVE.es, when Blas Cantó click on the "releasing button" to release the song with the official video clip, filmed in Lanzarote (Canary Islands) and directed by Cristian Velasco.

Tomorrow, January 31th, "Universo" will be available on digital platforms and Blas Cantó youtube channel. It's expected that the artist premieres "Universo" soon in a show of the talent show "Operación Triunfo 2020".

“I Understand that the song you like or not, but I don't want to have nightmares when I'm sleeping" said in a twitter yesterday where he asks respect about the commentaries negatives that now he will have about his song in the social networks.

As the singer explained this entry was chosen between 50 songs created by international composers and producers. However from the beginning, the "middle tempo with an epic end", was the favorite of Blas that wanted a song that "has an only word and will be easy to understand in many languages".


Before the title announcement, the singer cleaned all posts of his Instagram profile and only left a post with the hashtag  #euroestreno, a symbol of a new musical career that Blas Cantó will start with his participation in Eurovision. Also in the only story in this profile appears the artist touching the nose of the Greyfriars Bobby statue, the starring dog in the Scottish most popular legend while he says "I know that you will help me".

" "Universo has a new and risky style for me, but keeping my essence. I'm so happy with the results. I had carte blanche to work in the song", has explained Blas, satisfied with the collaboration of the Spanish broadcaster to create his song in the 65th edition of the Eurovision Song Contest.

As the singer has explained in an interview to La Opinion de Murcia that "the chosen song has been created with Dan Hammond, composer and producer, and another professional of the music"

Hammond participated, some week ago, with Blas Cantó in a songwriter camp, with the musical producer Mikolaj Trybulec, that created "Friend of a friend", the song of Czech Republic in Tel Aviv and the English duo Bright Sparks, that got that their song "On My Way", was played 80 million times in Spotify in his collaboration with  DJ Tiësto.

On October 5th, Blas Cantó became the Spanish representative in Rotterdam 2020 after an internal election of RTVE. Spanish broadcaster announced this format for Eurovision 2020 after the bad results in the last years with a national selection. In 2018 and 2019 this selection was made with the talent show Operacion Triunfo.