Listen the shortlisted songs for Supernova 2020 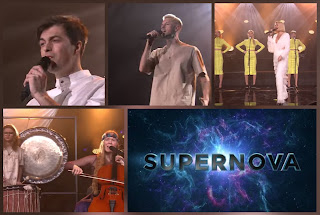 The Latvian broadcaster, LTV, has unveiled today the videos with the live auditions of the 26 artists and songs, shortlisted from an amount of 126, and submitted for the national final Supernova 2020.

These videos were filmed in December in a closed door audition.

The main change of this edition of Supernova is that the contest will have only a final show, disappearing the semi-finals. Instead these 26 candidates will be evaluated now by a jury that will select 8 finalists, considering aspects as the song, the audition performance, also the views of the video in youtube.

The eight finalists will be unveiled on January 18th. They will compete on February 8th in a final show for the honor to represent the baltic country in Rotterdam.

Some candidates are known by the public, as the veterans Markus Riva or Samanta Tina, with their songs composed by Aminata (Latvia 2015). In addition Madara, favorite to the victory in 2018, and Katrīna Dimanta, member of Aarzemnieki (Latvia 2014), are on the list.

The 26 shortlisted candidates are:
Source: LTV