Listen “Out of air”, second song directly qualified to the MGP 2020 final 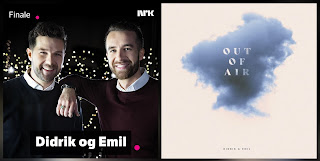 Today NRK, Norwegian broadcaster, has releases, “Out of air”, the second finalist song, that will perform in the final of MGP 2020 the brothers Didrik (Norway 2010) and Emil Solli-Tangen.


Didrik Solli-Tangende, 32 years old, is known for his participation as a representative of the host country in the ESC 2010 with the theme "My heart is yours". After passing through the contest he began touring his country and abroad, where he came to perform with important artists such as José Carreras. He was host in the TV dance contest, Skal vi danse.

On this occasion, he will compete alongside his 28-year-old brother Emil. Admitted at the age of 19 at the Barratt-Due Conservatory of Music and at the State Opera Academy, both in Oslo, in 2013 he was part of the Heavy-metal band Growth. Since then he combines his concerts with his participation in operas throughout the country.

Following the format of this year, with a finalist performance each semi-final, tomorrow both friends will sing live in the second Semi-final as guest of the show.

This semifinal will be held at the H3 Arena in Fornebu (Oslo), at 19:50 CET. The four participants from East region of the country, will face each other in successive duels mode until left a single winner. This winner will get the pass to the final where he will join the five selected internally by NRK, and as happened with Raylee, chosen on the first semi-final.

JÆGER - “How About Mars”