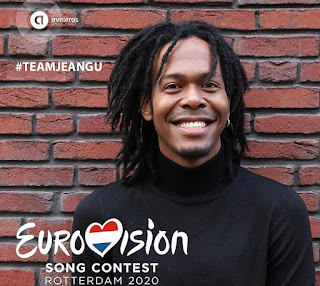 The Dutch selection committee confirmed today that Jeangu Macrooy will represent the Netherlands at the Eurovision Song Contest 2020.
According to the managing director of Dutch broadcaster AVROTROS and member of the selection committee Eric van Stade, Jeangu has been on the radar for quite some time. “The song he delivered touched us right away. We are very happy that Jeangu wants to go on this journey with us!”
Jeangu is equally as delighted with the news: “I am indescribably honoured! It’s a dream come true and the most beautiful thing that has come my way so far. My team and I are excited to make the Netherlands proud! Let’s go!”
Jeangu Macrooy was born in 1993 in Paramaribo, Suriname. The seeds to Jeangu’s journey were planted when he received a guitar as a 13th birthday present from his parents. Together with his twin brother Xillan, a musical duo was formed.
Jeangu’s musical ambition turned out to be bigger than the music scene in his native Suriname, leading to his move to the Netherlands in 2014. There he met producer and composer Perquisite who signed him to his label, Unexpected Records. From that moment, Jeangu’s career in the Dutch music industry was on the fast track. He has since played several big Dutch festivals, is a recurring guest in TV shows and has been nominated twice for an Edison Award, the Dutch equivalent to the American Grammy Awards.
Jeangu's entry will be released at a later date.
Source: Eurovision.tv