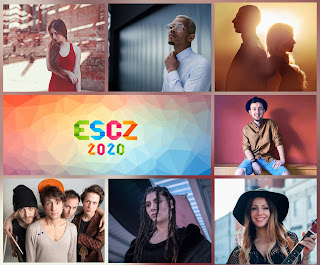 After the announcement of artists, Czech broadcaster, ČT, has unveiled today the songs that will compete in the national selection for Eurovision, ESCZ 2020:
Barbora Mochowa participated and was favorite in the last edition of this contest, where  was first in the jury voting and third overall.

Pam Rabbit is another participant that repeat again this year, after her experience in 2019 when she came fourth. The Armenian born singer has already gone through the Eurovision experience once before, albeit as a backing vocalist for Mikolas Josef in 2018.

Olga Lounová, a showbiz veteran, she’s been acting in TV and movies since 1998, although her music career only took off comparatively recently with her first LP arriving in 2011. In that decade, she’s enjoyed numerous hits. Her most viewed YouTube clip is “Jsem optimista” with over 23.5 million hits.

Ben Cristo, also known as Ben Cristovao,  this multi-talented artist of Angolan-descent is one of the Czech Republic’s hottest names. Since 2013, he’s racked up 11 top ten hits in the Singles Digital Top 50 chart, nine of which have been in the last five years. His popularity extends onto social media, where he boasts an Instagram following of over 780,000.

Karelll although in a new talent in Czech Republic, he has reached the success with his pop style music.

The duo formed by Elis Mraz y Cis T is a interesting combination of the pop style of Elis and the rap music of Cis T, a singer from Slovakia, a country where Elis reached the semi-final in the local version of The Voice.

From 8:00 CET the international public can vote for its favorite in the official Eurovision app. Voting ends on Sunday February 2th at 20:00 CET
Besides the votes of the public, a international jury, formed by ten participants in Eurovision Song Contest, will evaluate and vote the finalists.

After sum all votes each candidate (50% from the public and 50% from the jury), Czech representative in Eurovision Song Contest 2019 will be announced on February 3th.
Fuente: Eurovision.tv, ČT