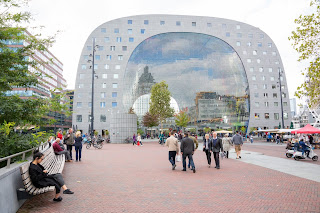 The meeting point between Eurovision fans, delegations, and artists each Eurovision Song Contest, Eurovision Village,  has been unveiled.

As Head of Cultural Events for Rotterdam has revealed today, Binnenrotte, in central Rotterdam, is the location for the Eurovision Village.  Binnenrotte was originally the part of the Rotte river within the buildings of Rotterdam. In 1871was filled in for the construction of the railway viaduct in the Rotterdam-Dordrecht line. The viaduct was demolished after the construction of the Willemsspoort tunnel in 1993.

Today Binenrotte, one of the touristic views of the city, is the home to Rotterdam’s Central Market (Markthal), which opens on Tuesdays and Fridays.

Binnenrotte, one of the largest open places in Center Rotterdam, is located near many of Rotterdam’s main attractions (Markthal, Rotterdam Library, Blacktooren, etc), is well communicated and easily accessible.

As Said Kasmi, Councilman of Culture has secured, activity in the market will be able to continue as normal during the competition:

"We are having a good conversation with them (market traders). The market can continue as usual, but everyone has to move a little. That is the result of hosting such a beautiful, beautiful party."

For now, the event's schedule of Eurovision Village hasn't confirmed and The Council of Rotterdam is working on it between all ideas received.


Live performances, competitions, themed parties will all take place at this Eurovision hotspot. You will be able to see the 2020 Eurovision acts performing on its stage. Also, as previous editions, giant screens will be set up, where the public will be able to watch the 3 Eurovision shows live from here. Visitors, fans and locals will also get to savor local delicacies and food at the various food stalls.

Eurovision Song Contest 2020 is scheduled to be held on  12, 14 and 16 May at the Rotterdam Ahoy in Rotterdam, The Netherlands.