Slovenia anounces the participants of EMA 2020 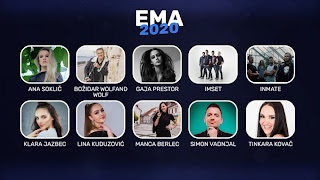 Slovenian broadcaster (RTVSlo) has announced the list of participants of its national final, EMA 2020 , internally selected by a experts jury.
Two participants more will be added after EMA FREŠ final, aired on 18 February. This contest was created this year to give a chance to young and new musical talents to participate in EMA.
Tinkara Kovač, Slovenian representative in Eurovisión 2014 is in the list. The singer was second last with "Round and round".


Another participant well-know in Eurovisión is Lina Kuduzović. The singer was third in Junior Eurovision Song Contest 2015 with "Prva ljubezen".

EMA 2020 Final will be held on 22 February in the RTVSlo's Estudio 1. A experts jury will choose two participants in the first voting round. Then, in the second round, the public will decide both who will represent Slovenia in Eurovision Song Contest 2020.
Participants of the EMA 2020:
Source: RTVSlo