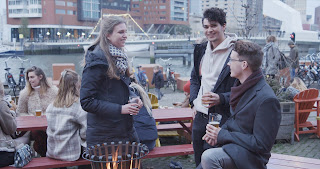 Dutch broadcaster, NPO, has unveiled the idea and concept to create the postcard for Eurovision Song Contest 2020, an important element of each edition of the contest and used to present the participants.

NPO wants for the postcard an element to join these participants and different traditions or activities of the Dutch people, remembering the slogan for Eurovision 2020, Open Up, as an opening element between both.

For this reason, the broadcaster has begun to look for associations, football clubs, groups or another organizations interested to participate in the postcard,  doing with the artists different activities as a football match, building a carnival carriage, a cooking workshop, an afternoon skating in the skate park, etc...

All the Dutch people wishing to take part in the postcard can apply here.

How has explained Sietse Bakker, Executive Producer of Eurovision 2020 "We consciously chose to show the best of the Netherlands during postcards: the people and their hospitality, in all their diversity. Dutch people often meet each other through hobbies, activities, traditions, and communities.
From the street barbecue, the carnival organizations, fraternities to to football clubs, choirs to breakdance groups  – we do it together. During the Eurovision Song Contest 2020 we want to show that to 180 million viewers. With the theme of Open Up as a common thread, we want show the positive, connecting force that suits our country"

Although the exact details of the postcards haven't been unveiled, Sietse has added a hint: "This time we opt for a different interpretation than the often more tourist impressions presented by the Host Country during the Eurovision Song Contest"

Created by the Dutch audiovisual company IDTV, these postcards will be recorded between March and April next year.