Open Up!: EBU unveils the stage for Rotterdam 2020

We knew the slogan and the logo of this year's edition. Now EBU has revealed how the stage will be.

The design is inspired by the theme 'Open Up' and the typical Dutch flat landscape. Veteran stage designer Florian Wieder will do it again, in a collaboration between Dutch and foreign designers.

As Wieder explains “The design shows the connection between the sky, the sea and the land. The horizon links these elements and that horizon will work as a window to open up the world of Eurovision 2020. The floor plan of the stage is inspired by the canals and bridges that connect land and water in the Netherlands. With this design, we want to bring the artists as close as possible to the audience.”

“I was inspired by the unique characteristics of Dutch Design. Based on that, I wanted to create an unconventional, minimalist and modern concept for next year's show. I am very happy that the Dutch public broadcaster has been so openminded and has enthusiastically embraced this design. As far as I'm concerned, this is a new chapter in stage design, a wish I have had for a long time.",adds the professional, who, at the beginning of his career, did his work in several editions of the Awards MTV, the Emmy Awards and other international television programs, important and well-known.

Unlike what happened in Tel Aviv, located in another pavilion, the Green Room is back next to the stage, making the audience and the audience feel even more connected with the artists of the 41 participating countries.

According to Sietse Bakker, executive producer of the Eurovision Song Contest 2020 event, this design adapts perfectly to the story that the creators want to tell:

"The design is innovative, modest and functionally intelligent. In this way, we can create a completely different look for each of the 41 participating countries, opening and interval events and during the voting results. We will present an innovative scenario design, great in its simplicity and full of surprises. The designer has perfectly translated this desire into his design. " 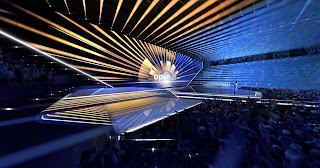 "Although his experience is clearly reflected in this design, he knows how to surprise," Bakker adds in reference to Wieder, after three years creating the designs for Eurovision

The stage will begin to be built in the Rotterdam Ahoy in the first weeks of April 2020.