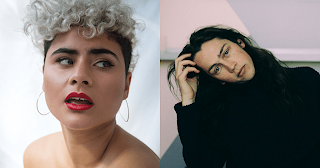 Montaigne, with only 24 years, the artist based in Sydney, has become an important name in Australian indie music. In recent years, she was recognized for her work with multiple places in the Triple J’s Hottest 100, an ARIA Award for Best New Artist and a nomination for Best Female Artist on her debut album Glorious Heights. His second album COMPLEX was released in August with great critical success.

Como she has explained “I’m excited to participate in Eurovision – Australia Decides for the opportunity to release the part of me that is dramatic and extreme. I manage to do it without a massive international music event as impetus, but on the big stage in Europe in front of millions would be everything the drama queen egomaniac inside me could want and more. It’s licence to let her out. And of course to represent my country! I didn’t quite get that far in football, so it would be cool to do it in music. It’s like the World Cup for pop.

Didirri, with his debut EP Measurements, has collected over 30 million streams, and led to Didirri playing such renowned festivals as the UK’s The Great Escape and Latitude Festival, Australia’s Splendour In The Grass and Barcelona’s Primavera Sound. In a matter of months, he toured the US and UK twice and shared the stage with well-known acts Vance Joy, Hozier, Tash Sultana, The Temper Trap and more.

“I have always been interested in writers", says the artist. "Although the world of Eurovision is new to me, from the outside it seems to respect a well-written song above all else. People seem to be free to express their art in whatever way they want. I’m a fan of ABBA, they wrote unfiltered, iconic anthems. My sister and I used to sing their stuff together in the bathroom. Who knows how they have influenced me, I’m quite a mix bag of ideas. Personal experience inspires most of my own writing - all I hope to do is to help people express some part of themselves. I’m also over the moon to be joining the line-up with my friend Montaigne who I respect very much.”

These 2 artists join the previously announced, the Australian icon Vanessa Amorosi, the powerful artist Casey Donovan, the First Nations emerging artist Mitch Tambo, the award-winning singer and songwriter iOTA. All of them will compete for the ticket to Rotterdam in the final Eurovision - Australia decides on Saturday 8 February at 10:30 CET  (19:30 AEST).