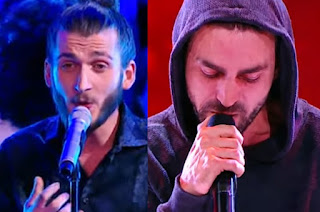 Georgian Idol 2020 the talent show to choose its representative at Rotterdam 2020, has celebrated its seventh gala tonight, dedicated to songs created by the well-known composer Andrew Lloyd Webber, a show plenty of  anecdotes.
Tornike Kipiani, favorite in the last two programs, took the stage to perform "Gethsemane" of the musical "Jesus Christ Superstar." In addition to a perfect interpretation, this performance surprised because the artist followed the lyrics of the song on his mobile, and the spontaneous one that went up to kiss the artist's cheek.
The anecdotes of the night continued when the four judges showed  banners asking the freedom of Dr. Vazha Gaprindashvili. This well-known doctor, president of the Association of Orthopedists and Traumatologists of Georgia, has been arrested and sentenced by the authorities of South Ossetia to two months of preventive jail for crossing his border to treat a patient.
After the performances, the results of public voting were revealed. One more week Tornike strengthens his favorite position, while Anri Guchmanidze, winner of X Factor Georgia, is out of the competition by being the least voted with only 9.90% of the vote.
Voting results:
Tornike Kipiani – “Gethsemane (I only want to say)” – 24.05%
Barbara Samkharadze – “Jesus Christ Superstar” – 15.15%
Mariam Gogiberidze – “I don’t know how to love him” – 14.06%
Tamar Kakalashvili – “As if we never said goodbye” – 13.79%
Mariam Shengelia – “Memory” – 12.26%
Davit Rusadze – “Anydream  will do” – 10.79%
Anri Guchmanidze – “Close every door” – 9.90%
Source: GPB