Fest 58: Listen to the songs and know who will perform them 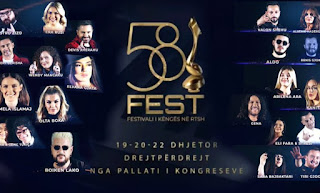 After Albanian broadcaster, RTSH has unveiled participants, venue and dates, today has announced the songs that these artists will perform in Festivali i Këngës 58, the traditional contest that the Balkan country uses to select the candidate for Eurovision.

This edition will begin on 19th December at Pallati i Kongreseve (Palace of  Congresses) in Tirana with the Grand Final on 22th December, and a "free night" show on 21st December.

Alketa Vejsiu will host the event. Journalist and TV producer, she is well-know in Albania as host of successful TV shows like X-Factor, Dance with Me  or Your Face Sounds Familiar, apart from the show to select Mr and Miss Albania.

The runner-ups of  Eurovision Song Contest 2018 and 2019, Eleni Foureira (Cyprus) and Mahmood (Italy) will be two special guests in this contest that select the Albanian representative in Rotterdam.

20 participants will compete for this honor. Some of these artists have previously taken part in Eurovision: Tiri Gjoci and Wendy Mancaku were backing vocals of Jonida Maliqui in Telaviv, and Olta Boka represented Albania in Moscow 2008 with "Zemrën e lamë peng".

Arilena Ara and Elvana Gjata, very popular artists in this country, are two favorites to reach the victory.

Eugent Bushpepa, Albanian representative in ESC 2018 participate in this edition as the composer of the song "Kutia e Pandorës", performed by Valon Shehu.