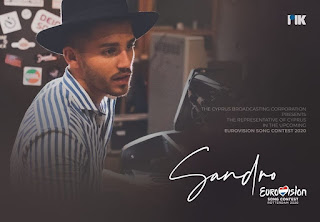 The CyBC broadcaster has confirmed it. Finally, and after rumors about possible names, the German-Greek German singer Sandro Nicolas will represent Cyprus in Eurovision 2020.


How was commented in a Cypriot TV program last week this name, will be the candidate elected and CyBC has been shortlisted three songs for  Sandro: “Mucho Calor”, “Can't Look Away” and “Never Let You Down”

Sandro's song in Rotterdam will be chosen internally and will be announced later. Although one of the songs above could be the Cypriot song in Rotterdam, other information indicates that the first two could be replaced by "My Getaway" and "Falling to Pieces". Also, the style of the chosen song could be pop-rock, close to his admired Canadian singer Shawn Mendes.

Alessandro Rütten, well-know as Sandro, born in Germany 23 years ago, from an American father and a Greek mother, so he speaks fluently German, English and Greek.  With an early interest in music, he started playing drums at age four, moving on to the guitar and writing his own songs, later, at age 15.

In 2015, he auditioned for Supertalent, the German version of the Got Talent franchise. Sandro did not go far in the contest, saying and feeling that "the format did not fit".He continued working on his music and claim to fame in the 2018 season of The Voice of Germany. Sandro impressed both the "coach" of the series and the audience with his powerful audition of  "In My Blood" by Shawn Mendes. He was finally eliminated in the sing-off rounds but left the contest as one of the most memorable acts.

Earlier this year, Sandro represented the United States in New Wave 2019, the international competition for young singers. This was his debut with his new stage name, Sandro Nicolas. Sandro captivated the voting panel with his performances during the week. He finished sixth with 243 points, a rank higher than  Eurovision's star Aisel (Azerbaijan 2018), who finished eighth.


The broadcaster of the Mediterranean country follows the election format of the last two years with an internal election: in 2018 with Eleni Foureira (its best position to date, second) and this year with Tamta, thirteen in the final.

With this name, there are already four countries that have confirmed their representative: Sandro (Cyprus) Hooverphonic (Belgium), Blas Cantó (Spain) and the most recent VICTORIA (Bulgaria).