Amanda Aasa : "we want to combine in Melodifestivalen the music that I’ll be releasing next year with the ”mellogenre” 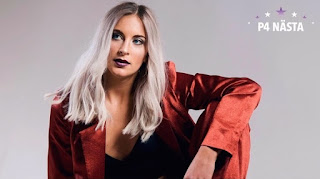 Amanda Aasa, was selected, the past 24 August in P4 Nästa 2019, as the Melodifestivalen 2020 first participant thanks to her song "Gå hem".


Young artist and songwriter grew up in the coastal town, Örnsköldsvik, Amanda first made an impact in 2014 when she auditioned for Swedish Idol. While Amanda didn’t make it to the live shows, she impressed the judges with her original musical touch.

Amanda also returned to Idol in 2017, but again didn’t progress to the live shows. But she didn’t let that hold her back. Amanda has kept working on her music and, as she told Aftonbladet, Melodifestivalen has been in her sights, Something that seems to have reached.


Apart from this Amanda has been associated with artists such as Miss Li and Dotter and has played festivals around Sweden.

Eurovision-spot has had the chance to speak with this singer in this success moment.

Hi, good to talk to you!

My first question it's about your musical origins. When did your interestest for the music start? do you have musicians o songwriters in your family?

I come from a very musical family and I've always been surrounded by music growing up. None of my parents are musicians professionally, really, but they’ve always been very supportive of me wanting to make a living out of my music. I’ve always written my own little songs and I feel like I can't remember a life without me making music.

Why did you decide to participate in P4 Nästa? did someone encourage you or decide it by yourself?

I’ve entered the contest once before, where I won in the district but didn’t make it to the national final. This year, with my new team and a new-found sense of what type of music I want to make, we wanted to try our music on the radio and see how people felt about it. It was quite spontaneous actually!

What did you think when you got the place to participate in Melodifestivalen 2020?

To be honest, it felt unreal. We are incredibly happy.

One year ago, The Lovers of Valdaro, like you, be qualified to the Sweden National Final.did they give you some advice?

We had a minute to talk after the show was over, and they were so generous with their congratulations. They told me to enjoy and appreciate the experience.

Pop, ballad, Schlager.., What style of the song would you like to participate in the Melodifestivalen 2020 ?

Definitely pop. We want to combine the music that I’ll be releasing next year with the ”mellogenre”.A song that works great for the stage and format but still reminds the audience of what’s to come.

Now, Imagine the future. You win the contest and, of course, the place to represent your country in Rotterdam. Who would like to dedicate the victory?

The victory feels pretty distant considering I’ll be entering with a song in Swedish, and it was areally long time ago Sweden sent a song in Swedish to Eurovision. However, whatever success I have in the contest, I dedicate it all to my team.

What are you musical projects in a short time? A disc, a tour?

Melodifestivalen is the start and debut of my artistry as it is today, and I’ll be releasing a minialbum in the spring of 2020.

Do you follow Eurovision Song Contest? ¿Dou You have a favorite of its history?

A lot more when I was younger. A vivid memory is that of Lena Papparizou winning for Greece. Remember loving the song, and that she had ties to Sweden.

Do you know anything about Spanish Music at present? had you listened to something of Spanish groups or singers?

I’ve listened a lot to Rosalia, I think she’s really good. Other than that I’ll have to research more!

Do you want to send a message to your fans that can follow us?

Thank you for taking your time reading this and have the best day!

That's all Amanda. Thank you for your time and good luck in Melodifestivalen 2020

From eurovision-spot want to thank Amanda Aasa for her time and wish her the best in Swedish national final. Lycka till Amanda!