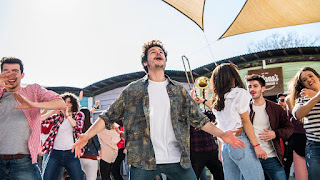 The Spanish entry raises,  at least at the betting houses. According to these La Venda, the song  that will be defend by Miki Nuñez on May 18 in Tel Aviv goes from position 20, to which he remained almost from the beginning on the bets, to a fifteenth place, thus approaching the "top 10". A position, if its confirmed in this final, would be a more than desirable position after the last years in the contest when the Spanish entry has been in the last positions of the musical contest.

La Venda, a song that the young artist Catalonian will play, its a fusion between the ska and the rumba styles, something not strange because the composser is Adrià Salas member of the the well-known Spanish group of this genre, La Pegatina.

It is the first time that the Spanish proposal has climbed so high since it was presented by RTVE and selected by the Spanish public in a special program in which Miki competed along with other ex participants of the "talent show" Operación Triunfo 2018.

According to these bets the Dutch candidate  Duncan Laurence with the intimate Arcade, keeps the first position,  followed by the Russian Sergey Lazarev with his epic Scream and closing the podium one of the most intimated and contemporary proposals of this edition, Soldi, by the Italian Mahmoud.

Remember that Spain is not among the top ten of the contest since the participation of Ruth Lorenzo in 2014 with Dancing in the Rain, linking since then a series of failures that have made them be  in the last positions of the table.

To get into the top ten, Miki would have to overcome proposals such as the gospel  style song Too Late for Love, by Sweden John Lundvik; the dance pop Replay, from Cyprus, with Tamta; the Maltese Chameleon, by Michela; the singing of female empowerment Better Love by the Greek-Canadian Katerine Dusk; the punk-metal, Rammstein style, of the Icelandic Hatari with Hatrio Mun Sigra, and the strange Telemóveis, of the Portuguese Conan Osíris.

To achieve this RTVE has decided to give all, signing the staging with the veteran artistic director Fokas Evagelinos, with a long experience in the contest, and whose achievements are hits as the first victory of Greece in 2005 with Helena Paparizou and My Number One.