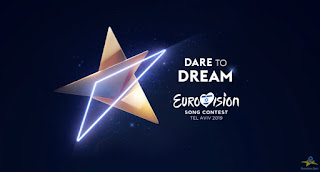 182 million viewers. This is the quantity that the EBU confirms about the viewing of the European music event (Semifinals and Grand final) in the countries that have participated in this year's edition.

These results, although high, suppose a reduction in 4 million with respect to the last year, and are equal to the obtained in Kiev in 2017, the lowest since 2013.

However, the Grand Final, on May 18th, reaches an audience share of 36.7%, increasing by 9 points the results obtained in the last four years, an amount that doubles the reached through the broadcast channels in the same time slot (16.7%).

It is noteworthy, by age group, an increased interest in the contest of the youth public, in a range of ages between 15-24 years, viewing the Grand Final on Saturday, with a 45.3%  audience share, increasing in 2% the results obtained last year. No bad amount if we look that the average audience of this group, at the same hours and in these channels, does not exceed 11.7%.

The online audience in the official YouTube channel reaches 40 million viewers in 225 territories during the Eurovision week, and, as in the case of traditional viewing, 75% of these audience comes from people with less of 35 years, confirming the youth's interest in the festival. On the other way, social networks had 5 million engagement actions of which 70% came from their official account on Instagram. 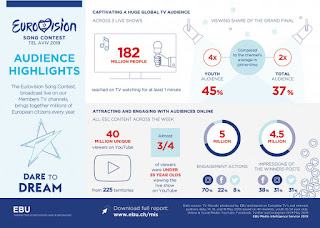 If we look by countries, the winner, the Netherlands, the national broadcast NPO / AVROTRO, has reached the amount of 4.5 million viewers monopolizing 73.4% of the television viewing of the country, the highest since 2014 when The Common Linnets, Dutch candidates in Copenhagen, achieved the second position.

For Israel, Eurovision Song Contest 2019 host country, there have been 1.3 million viewers in the Grand Final with a 63.2% audience share, the highest since records were established in 2003.

To highlight the case of Iceland, which again shines at the level of audiences, with a 98.4% share, and its best results since 2014, when it reached 98.6%. An amount that undoubtedly owes a lot to the fact that its representative, Hatari, reached the Grand Final, a fact the Nordic country had not achieved for five years.

Germany, despite its poor results, continues to engage the audience, more than any other country, reaching 7.6 million viewers for the ninth year in a row. Germany, another member of the Big Five, achieved its best result since 2011, when it returned to the contest, with 3.4 million up 5% compared to last year.