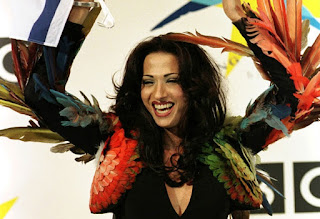 In a few days the city Tel Aviv will held one of the most important musical shows in Europe and as this event approaches, more details about are know.

One of these latest news, from Israeli media, is about to the participation of Eurovision Song Contest 1998 winner by this country, Dana International.

According to the mentioned media the singer will open the Final on May 18th with a new version of the famous Diva, the song that gave her the victory. How the media says this new version will include oriental tones. So Dana will perform Tel Aviv, a song by Omer Adam, who will not appear on stage due to the Shabbat, weekly rest according to the Jewish religion. Tel Aviv, according to the sources, will have "a humorous wink about the Mediterranean genre".

Her performance will be attended by several dancers. After that he singer will welcome the 41 participants of the Grand Final, which will descend from a false plane as an improvised catwalk that will leave them on stage.

Along with this winner, four other winners will join the musical party performing a "mashup" of Eurovision songs: Conchita Wurst (2014 winner) will sing Heroes (Sweden 2015), Måns Zelmerlöw (2016 winner) will perform Fuego (Cyprus 2018), Eleni Foureira (Cyprus 2018) will sing Dancing Lasha Tumbai (Ukraine 2007) and Verka Serduchka (Ukraine 2007) will do the same with Toy (Israel 2018).

All of them will join Gali Atari (Eurovision 1979 winner), to perform together, Hallelujah, the song that gave her the victory, now a well-known theme of the Eurovision Song Contest.

As advance the news Madonna will perform in this Grand Final his well-known Like A Prayer ,coinciding with the 30th anniversary of its premiere.

Another international star invited, in this case from Hollywood, is the israeli actress Gal Gadot, known for her role as Wonder Woman in different films of the Marvel franchise. Gadot appears in a pre-recorded sketch, where aboard a taxi will visit different sights of the city host.